In previous blog posts, I have talked about how Joe and I stick to our $50 per day round-the-world travel budget. Since we are not currently bringing in any income on the road and are instead relying on our pre-travel savings, a large part of our focus is on reducing costs in order to save money and stay within budget. One money-saving strategy we have utilized on our trip has been to do Workaways.

Workaway.info is a website to find volunteer positions around the world that provide room and board in exchange for a set number of working hours per week, usually 25-30. There are thousands of Workaway hosts worldwide offering all sorts of jobs including working at hostels, on farms, at hotels or guesthouses, at summer camps, housesitting, working at non-profits, babysitting, helping the elderly, and more. It is free for hosts to register on Workaway and list the projects they need help with. It costs $40-$50 for workers to join depending on if you are an individual or a pair/couple. The upfront cost of joining is something to consider, but the amount of money we saved within the first week of doing a Workaway more than made up for the initial investment.

Through Workaway, Joe and I have worked at two hostels in Malaysia and two homestays in Bulgaria and Portugal. The hostel work included checking guests in and out, cleaning the rooms and bathrooms, changing the beds, and giving guests information about the local area. 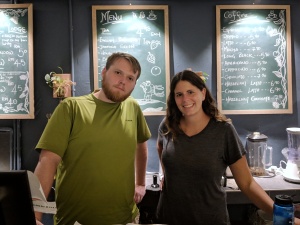 At the first hostel we were provided with two beds in the dorm room and at the second hostel we were given a private room. During our shifts the owner of the second hostel would go buy us lunch from a local spot, which was great because we got to try a bunch of different curries and Malaysian food. He also bought us bread, eggs, and butter to make breakfast. We saved so much money on food and lodging during our two weeks at that hostel. 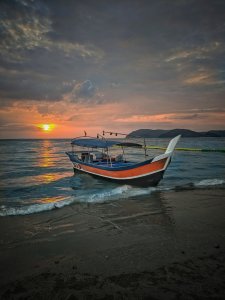 And did I mention that we were staying on a tropical island two minutes from the beach? Of course, it’s not all beaches and sunshine. As the name implies, there is work involved in Workaway positions. I believe before anyone has a child they should work at a hostel because they will deal with enough crying, constantly cleaning up after others, and blowout bowel movements to properly prepare them for parenthood. 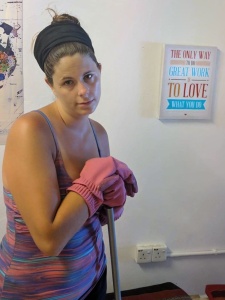 “The only way to do great work is to love what you do.” -Me, mopping the floors of a backpackers hostel

Overall, though, the couple hours of work we did each day in exchange for room and board were a huge help to keeping us within budget and it was easy enough work.

Our homestays in Bulgaria and Portugal had a different vibe than working at hostels, as we were more a part of the family than unpaid staff. We spent almost two weeks in a town called Boryana, Bulgaria with an English couple in their early sixties. We helped them with outside work and maintenance, including weed eating the entire orchard, pruning the trees, mowing the lawn, refinishing outdoor furniture, transplanting seedlings, weeding the garden, etc. 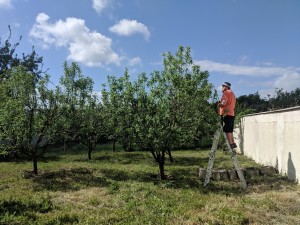 Pruning the trees in the orchard

We became dear friends with our host couple, and it felt really good to help them with projects that they could not keep up with on their own. We had never worked in an orchard before, but now I feel confident shaping fruit trees and look forward to having some of my own. Our hosts fed us wonderfully (including British staples like cottage pie and chicken Jalfrezi) and we ended up playing cards and watching soccer with them most nights. I was honestly sad to leave them and I hope to see those two again in the future. It was a Workaway that benefitted both parties and was our best experience.

Our second homestay in Portugal was our worst experience, and because of it I have another blog post in the works called, “Questions You Should Ask Before Doing a Workaway”. Stay tuned for that one, which will hopefully allow you to avoid some of the mistakes we made in not asking enough questions and agreeing to this Workaway. It was not a dangerous situation, but it was incredibly uncomfortable because we were sharing a home with a couple and their two-year-old daughter and it was evident they really did not want us there witnessing the tension between them. On top of the awkward social dynamics, we were also faced with the challenges of a two-year-old in the middle of potty training and a misrepresentation of the work we would be doing. While their Workaway profile asked for help creating a vegetable garden, a solar dehydrator, and a mud kitchen for their daughter, once we arrived it became apparent that they wanted us to babysit and pull a quarter acre of overgrown foot-high weeds by hand. King of the mountain (of weeds)

We accepted their decisions, so rather than creating permanent change through projects that would outlast our Workaway, we spent a combined total of forty-six hours pulling weeds that will inevitably grow back the next week. While we still saved money by doing this Workaway, the cost to benefit was much lower than previous jobs we’ve done. We finished weeding as quickly as we could and ended up leaving that Workaway early.

Overall, Workaway has been an awesome tool for saving money on the road, and it gives us the opportunity to do different things, learn new skills, and get to know people for longer than we normally would through Couchsurfing or hostels. Sometimes it doesn’t work out, but our experience has been overwhelmingly positive, and now we know what red flags to look for and questions to ask potential Workaway hosts. 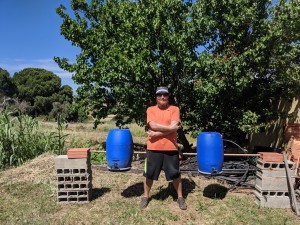 Joe with the compost tumbler he made!

Workaway has allowed us to save thousands of dollars and stay within budget on our round-the-world trip, and it has given us the chance to see beautiful parts of the world we otherwise would have overlooked.